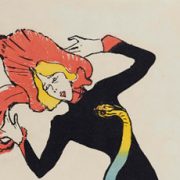 With a hundred works including paintings, drawings, engravings and works on paper, the ‘Paris, end of the century: Signac, Redon, Toulouse-Lautrec and their contemporaries’ analyses the artistic scene in Paris, focusing on the most important French vanguards of the late 19th century and in particular on the neo-Impressionists, Nabis and Symbolists, and their most prominent figures.